Nominated! Bruce Haines for Get Set 60 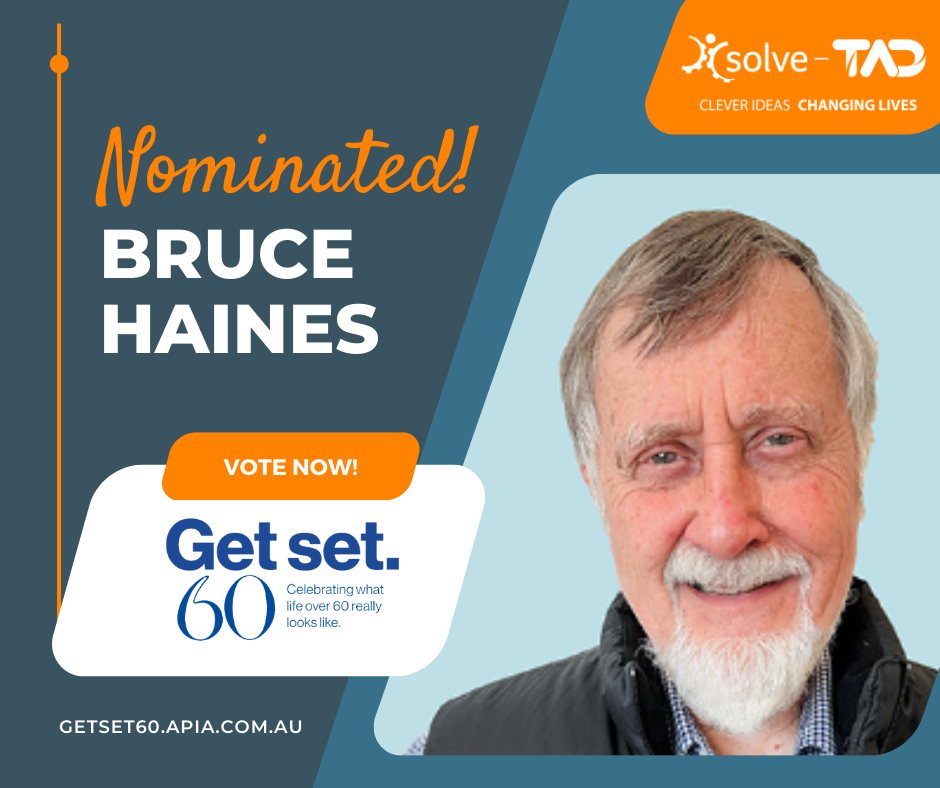 We are very excited to announce that Solve-TAD Volunteer Bruce Haines has been nominated for an award with Apia!
What do you think life after 60 is like? Apia’s Get Set. 60 aims to challenge society’s perceptions, by celebrating real Aussies
over the age of 60, who are as active, engaged and inspired as they’ve ever been.

Bruce is a highly skilled volunteer who has industry experience in mechanical engineering and workplace safety. He has completed 37 custom, assistive technology projects (unique solutions) for people living with disability. Examples of the projects Bruce has designed and constructed are;  modifying four wheeled walkers, folding travel commode, modifications to playpens, pivot transfer boards, modification of cot, modifying a camera stand and the list goes on!

Bruce is a very thoughtful, calm and patient person who has a lovely way of interacting with both clients and staff. He is meticulous and ensures his projects are of a high standard and quality. This is evident in his work from the design phase through to execution.

Bruce is very cognisant of listening to what the client requires and incorporating this into his designs. Concurrent with this, Bruce has safety at the top of his list. He is able to balance both the client needs and safety requirements to ensure the end product is both pleasing, functional and well constructed.

Bruce says if you’ve got your superannuation organised and there’s no longer a need to work full-time for your financial well-being, retirement is a great time to get involved as a volunteer. Being a volunteer can take many forms. Importantly, it can provide an outlet for the skills you’ve accumulated in the past.

Bruce is the second youngest of six children and a common refrain from his mum early on, particularly if she found her children at a loose end, would be “go and make yourself useful!!” Reflecting on that now, Bruce thinks each of his brothers and sisters took this advice from their Mum to heart and all do this in their own way. They have all kept busy and have rarely been short of things to do, while making themselves “useful”.

Bruce has always enjoyed making things and from an early age had access to his grandfather’s workshop at home where he could use his bench, vice and his carpentry tools. As well as working with wood, he also built toys with my Meccano and made long and short-range crystal sets from scratch – even a 3-transistor radio in the days when portable transistor radios were a novelty! Much later in life when he was a cadet engineer with McPhersons Engineering, part of his training included a year at McPhersons’ apprentice school, learning valuable metal-working skills that he still uses to this day.

Bruce first learned about Solve-TAD when it was called TADVIC when Mark Dohrmann, the founder of TADVIC, was a lecturer at Deakin University. Mark was delivering a design subject for a graduate course in Ergonomics that Bruce completed in 1988. Bruce thoroughly enjoyed Mark’s lectures and the TAD-VIC examples he used to illustrate some of his points about effective human engineering design. At the time Bruce was too busy to volunteer but kept in touch with the organisation and became more involved after retiring at age 65.

During the past 7 years he has been involved in at least 37 projects with Solve-TAD clients, working with them to understand their needs in order to make items of assistive technology that can be “useful” for them. In that time, he has also assisted Solve-TAD in establishing procedures for design risk management and acted as a peer reviewer for other volunteers. As well, he provides induction training for volunteers as they start out with Solve-TAD, he has found that being “useful” has no limits

Additionally, Bruce volunteers in a number of other formal and informal roles.

He set up a WhatsApp group for a neighbour who is in his nineties and had a fall a while back. Neighbours on both sides now, as well as his family members, share their news about what their Dad is up to. It helps connect everyone. Bruce cares for the environment and three mornings a week with his wife voluntarily to pick up rubbish in a local park. Why? Because it looks better afterwards!

Bruce is also a great fan of the public education system and while his two boys were at primary and secondary school he joined three different school councils. Now, in retirement, he helps out at the Merri Creek Primary School where his younger son works and has built numerous items of equipment for their After School Program, as well as run “Clubs” such as the Science Club and the Billy-Cart Club.

The following are examples of some of the things Bruce has built for the school:

In his “spare time” he also manages two afternoon groups of around 40 senior citizens who enjoy table tennis, they have a lot of fun at the local hall.

On a more formal level, he is an active member of the Management Committee of the Whitehorse Activities Club looking after the running of more than 30 different activity groups with a total membership of over 600 seniors.

I’m sure his Mum would be proud of his usefulness! With Solve-TAD he particularly enables clients to have greater independence and participate more in their; community, education, society and reach their personal goals.  He is a great supporter and contributor to the organisation and very well respected and valued by all. He is a terrific example of a retiree who gives back to the community and lives life to the fullest!

Solve-TAD acknowledges the traditional owners of country throughout Australia and recognises their continuing connection to land, waters and community. We pay our respects to them and their cultures and to elders past, present and emerging.